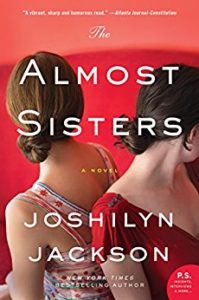 1.) What book is this book’s frenemy?

They’re all the other books about small, quirky southern towns where everyone knows who just clipped their toenails and how short. While Joshilyn Jackson’s The Almost Sisters (Harper Collins 2017) shares some DNA with those books, it doesn’t feel the need to go balls to the wall with the moonlight and magnolias. It’s also a bit smarter on race—main character Leia Birch isn’t a white savior, but rather a human being who frequently has to confront her implicit biases.

2.) What snack should you have while reading this book?

A lot of the story centers around a town matriarch named Emily, and that is not a coincidence. But it’s also about a comic book artist who gets knocked up by a guy in a Batman mask. So I’m going with sriracha grits, which strikes me as a deliciously geeky version of southern cuisine.

I see as Thora Birch as Leia Birch, not just because of her name, but because she’d kind of be doing an older version of her character from Ghost World; I don’t know if she can do a southern accent, but that never stopped anybody in a movie. William Jackson Harper from The Good Place could be Selcouth Martin, aka Batman, because he’s good at being a sexy nerd. And as I read I couldn’t help but picture Lois Smith, Sookie’s Gran from True Blood, as Leia’s grandmother, Birchie.

“Hugh says unmurdered people get regular buried. Not stuffed up into attics.”

“It was love, though. Love, or some other, nameless feeling that was sister to it. I was racked with it. It thundered through me, shook my frame…This, I thought. This is how supervillains start.”

“The South was like that optical illusion drawing of the duck that is at the same time a rabbit. I’d always see the duck first, his round eye cheery and his bill seeming to smile. But if I shifted my gaze, the duck’s bill morphed into flattened, worried ears. The cheery eye, reversed, held fear, and I could see only a solemn rabbit.”

Katie Burgess lives downwind of a mayonnaise factory in South Carolina. She does improv and is editor in chief of Emrys Journal.