the original old building torn down

decades ago, a new hospital built

on the same site and now reported

to be one of the most haunted

and spirits seen there often.

Some of the first images on television

show people running out of The Wal Mart,

running toward the river nearby,

people running to the border a common site.

The shooter’s manifesto was reported

to use some of the same phrases as

and 1930, rough estimates claim at least

Texas Rangers throughout the state.

used to be next to the Wal Mart.

and death metal were big as El Paso’s

answer to punk which never took off there.

They interviewed a Mexican grandmother

and grandfather who were shot in the store,

both alive and in the hospital, their grandchildren

surrounding their beds and reminding me that

El Paso was always a town of grandparents.

on horseback, leading his conquistadors north,

several horses drowning in the river, three of

the Spanish solders never returning from

the first expedition through the desert.

The shooter told police he came to town

to “kill as many Mexicans” as he could.

cry among the football players who called me

in El Paso, saved the lives of several children

by leading them out of the Wal Mart,

even pulling out his personal Glock,

in the state.  If so, besides the cops,

where was everybody with their drawn guns?

Texas leads the nation in

On CNN, a young protester

“If I Die in a Mass Killing,

Drop my body at the White House.”

My sister’s house is three miles

from the Wal Mart where she and

my brother-in-law shop every Saturday.

He was playing golf that day in

a Chicago man who devotes his life

to making wooden crosses for mass

killing victims all over the country,

tells CNN that he has made hundreds

since he started years ago.

I have been gone from El Paso

The Texas War Cry will be changed from

“Remember The Alamo” to

The brown waters of the Rio Grande 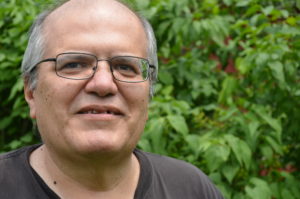 Ray Gonzalez is the author of 16 books of poetry.  He received a Witter Bynner Poetry Fellowship from The Library of Congress and a Lifetime Achievement Award from The Southwest Library Association.  He is a native of El Paso and teaches at The University of Minnesota in Minneapolis.