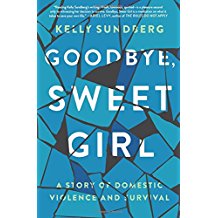 Goodbye, Sweet Girl: A Story of Domestic Violence and Survival

If this book took the form of a landscape, it would be a mashup of seemingly impossible terrains:

If this book was a room in the house, it would be a haunted closet. Everyone’s full of secrets – Kelly, her husband, her mother. Kelly never tells her mother about the time her neighbor tried to stab her or about the night an acquaintance sexually assaulted her. Even when her husband’s abuse carries out into the open, she figures out a way to conceal it:

I cried “I’ll fix this,” and headed upstairs.

Is this book papyrus, typewriter, desktop computer, or iPad? None of the above. This book is a voice, begging for us to listen:

I stopped writing because it was becoming impossible to rewrite the story in a way that felt authentic.

I stopped writing because I wanted to write, “I no longer know where he ends, and I begin.”

I stopped writing because I wanted to write, “He ends.”

I stopped writing because I wanted to write, “I begin.”

Sakinah Hofler is the 2017 winner of the Manchester Fiction Prize. Her work has appeared or is forthcoming in Mid-American Review, Hayden’s Ferry Review, Philadelphia Stories, and elsewhere. A former chemical engineer, she’s currently a PhD student and an Alfred C. Yates Fellow at the University of Cincinnati.