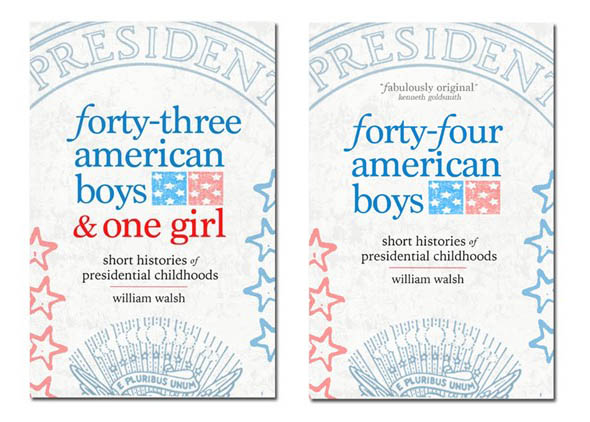 This is a guest post from author William Walsh, following our posts on creative writing and Trump. If you’re interested in contributing a guest post, please email me at m [dot] salesses [at gmail etc]. –Matthew Salesses, Website Editor

Great news for me because it was my book, a collection of short narratives on the childhood of the forty-three boys and one girl who grew up to become President of the United States. I had spent that last two years compiling the stories, with all of the text appropriated from 300-plus sources—children’s books, pop culture books,  and some academic history books.

Galleys of the book had been circulated earlier in the fall to potential reviewers and blurbers. There was great feedback almost immediately, and the sales team at Outpost19 was excited by conversations they were having with book buyers from markets that don’t usually plump for books by me.

Unfortunately, as you no doubt have heard by now, those 65,853,625 votes for my book didn’t matter. What mattered, what really counted, was the vote from the Electoral College. 304 of those electoral collegians voted for another book, this one titled Forty-four American Boys. That book is mine, too, and it is also published by Outpost19.

Fortunately, we were prepared for both votes. I had a two last chapters ready, depending upon the outcome of the election (even though the outcome had seemed, based on all of the polls, to be so assured). The publisher had a revised cover ready before the morning news shows.